Listen Live to 95.3 The Golden Oldies

Mike Powers
Mike Powers hails from the city of Paterson, New Jersey located just 12 miles from New York City, his childhood memories consists of all the fun at Palasades Amusement Park, getting “influenced” from listening to Announcers Cousin Brucie and Dan Ingram from 77 WABC Radio!! And of course , spending “time” at the “Jersey Shore”! After graduating from High School, enlisted in the U.S. Navy,  a Vietnam Era Veteran, after his discharge he attended Temple University in Philadelphia, Pa. Mike has always had a “passion” for  “good ol’ rock and roll” music and oldies!! Began his radio career in Philadelphia, and has worked in several markets in Pennsylvania , he has held various positions from announcer, sales, Program Director, General manager and now ownership. He has been with WHGL-FM “Wiggle 100”, WTZN AM 1310, WTTC AM 1550, WTZN-FM “Oldies 99” since 1992. He currently hosts the Morning show weekdays Monday-Friday from 6 AM-10 AM, which he proudly names …the “Morning Zoo” consisting of contest, requests, interviews,  , and daily giveaways and prizes to his audience. He is an avid New York Mets fan, in baseball, in the NFL his loyalty belongs to the Washington Redskins , and bleeds Blue and White for Penn State in college Football. Mike enjoys waking up early each morning and hit the “airwaves” as he says “if I can’t sleep in, ..neither can you!” He brings his style of entertainment and information to capture the radio audience that has somehow lost it’s stamina over the years, but listening to Mike Powers it’s truly the way Radio was meant to be!!

Connie Boyles
Connie Boyles a true native, born and raised in Troy Pennsylvania. She has been part of the radio staff at WHGL-FM Wiggle 100, WTZN AM 1310, WTTC AM 1550, and WTZN FM “oldies 99” since 1994. After graduating from High School, she entered into the floral profession, owning her own Florist Shop for over 20 years. She entered into the Radio industry as a salesperson, then got “bit by the “Broadcasting Bug!!” she has been co-hosting the morning show with Mike Powers , which they affectionally  call, the “Morning Zoo”  Connie brings a ton of creativity to the airwaves by creating contest, promotions, and ideas that keeps the show exciting and fresh every day!! She enjoys meeting our listeners at live remotes, appearances, and enjoys the local fairs, also a member of the Bradford County Heritage Association where each year she portrays a character from the 1800’s at the Historic Village, of times gone by. She loves the outdoors, gardening, reading, and relaxing at her home taking in the sights and beauty of Pennsylvania’s scenic landscapes. Connie, like her cohost Mike Powers, gets up early in the morning,  informing her listeners,( probably the first to tell them) what kind of weather  they can expect as they begin their day….We can honestly say, the Chemistry that Mike & Connie have, will keep you glued to the Radio dial, you just never know what they are up to, or what they’re going to do next!! 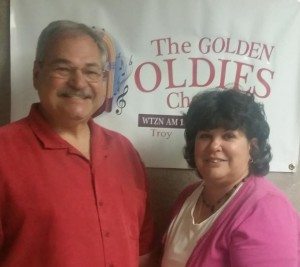